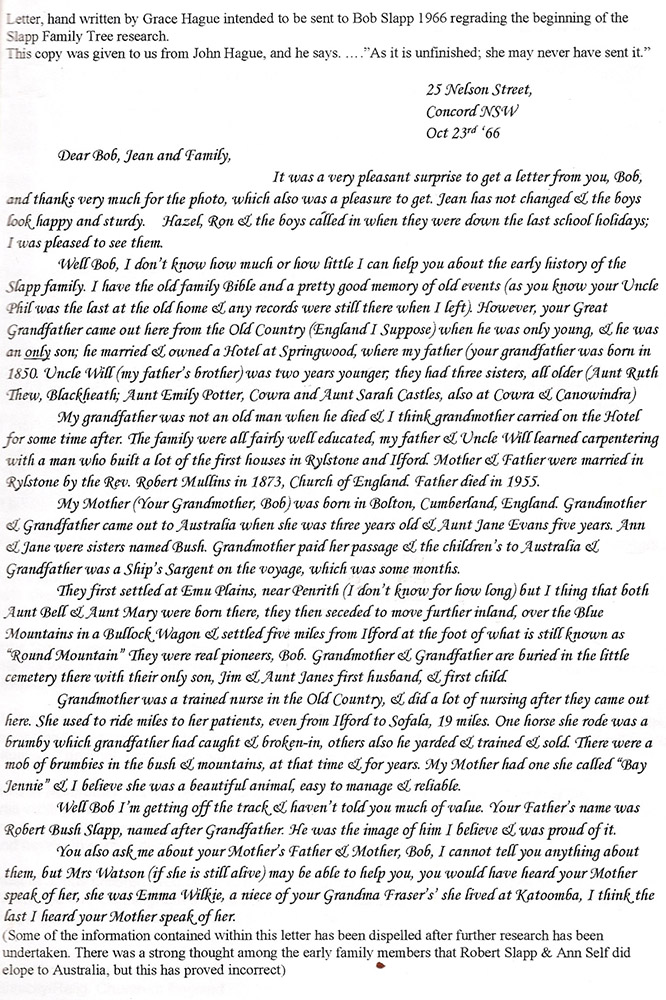 Letter, hand written by Grace Hague intended to be sent to Bob Slapp 1966 regrading the beginning of the Slapp Family Tree research.

This copy was given to us from John Hague, and he says. ….”As it is unfinished, she may never have sent it.”

It was a very pleasant surprise to get a letter from you, Bob, and thanks very much for the photo, which also was a pleasure to get. Jean has not changed & the boys lo0k happy and sturdy.    Hazel, Ron & the boys called in when they were down the last school holidays, I was pleased to see them.

Well Bob, I don’t know how much or how little I can help you about the early history of the Slapp family. I have the old family Bible and a pretty good memory of old events (as you know your Uncle Phil was the last at the old home & any records were still there when I left). However, your Great Grandfather came out here from the Old Country (England I Suppose) when he was only young, & he was an only son; he married & owned an Hotel at Springwood, where my father (your grandfather was born in 1850. Uncle Will  (William – my father’s brother) was two years younger; they had three sisters, all older (Aunt Ruth Thew, Blackheath; Aunt Emily Potter, Cowra and Aunt Sarah Castles, also at Cowra & Canowindra)

My grandfather was not an old man when he died & I think grandmother carried on the Hotel for some time after. The family were all fairly well educated, my father & Uncle Will learned carpentering with a man who built a lot of the first houses in Rylstone and Ilford. Mother & Father were married in Rylstone by the Rev. Robert Mullins in 1873, Church of England. Father died in 1955.

They first settled at Emu Plains, near Penrith (I don’t know for how long) but I thing that both Aunt Bell & Aunt Mary were born there, they then seceded to move further inland, over the Blue Mountains in a Bullock Wagon & settled five miles from Ilford at the foot of what is still known as “Round Mountain” They were real pioneers, Bob. Grandmother & Grandfather are buried in the little cemetery there with their only son, Jim & Aunt Janes first husband, & first child.

Grandmother was a trained nurse in the Old Country, & did a lot of nursing after they came out here. She used to ride miles to her patients, even from Ilford to Sofala, 19 miles. One horse she rode was a brumby which grandfather had caught & broken-in, others also he yarded & trained & sold. There were a mob of brumbies in the bush & mountains, at that time & for years. My Mother had one she called “Bay Jennie” & I believe she was a beautiful animal, easy to manage & reliable.

Well Bob I’m getting off the track & haven’t told you much of value. Your Father’s name was Robert Bush Slapp, named after Grandfather. He was the image of him I believe & was proud of it.

(Some of the information contained within this letter has been dispelled after further research has been undertaken. There was a strong thought among the early family members that Robert Slapp & Ann Self did elope to Australia, but this has proved incorrect and it appears to be Ann Mathews and Robert Bush, who’s daughter married John Slapp and later lived at ‘Pleasant Valley’ Ilford).